Your Favorite Songs From 100 Disney Channel Original Movies is a compilation by various artists. It was released on May 27, 2016. 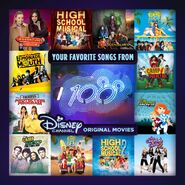 Add a photo to this gallery

Retrieved from "https://adventuresinbabysittingmovie.fandom.com/wiki/Your_Favorite_Songs_From_100_Disney_Channel_Original_Movies?oldid=2661"
Community content is available under CC-BY-SA unless otherwise noted.